The difference between excuse and execute

What is the difference between excuse and execute?

My focus for this post is one of the main concepts that I have seen and experienced when it comes to leading. There is no question that those leaders who stand out are the ones that not on achieve results but often exceed expectations. This is often a direct result of being accountable and taking action or in other words it they clearly understand the difference between excuse and execute.

To make a quick and simple comparison between these two words let’s take a look at their general definition:

Excuse is an attempt to lessen the blame attaching to (a fault or offense); seek to defend or justify.

Execute is the carrying out or putting into effect of a plan, order, or course of action.

After reviewing these two definitions it hopefully starts to become quite obvious what makes a great leader. They are the ones that focus on execution and not excuses. They are the ones that realize that nothing happens until a plan is decided upon and action is taken. When challenges present themselves, they don’t look for a way out but rather they look for a way to overcome and press forward. This is not always easy but it is worth it to achieve success.

I have mentioned many times that leaders come in many shapes and sizes. To be a leader you do not need some corporate title but rather the ability to set an example, influence others and get positive results. This comes from eliminating excuses and focusing on execution.

I want to share an incredible example of this with the man called The Iron Cowboy aka James Lawrence. If you have not heard about him, you will. Let me share with you why.

James is a goal driven individual who is focused on execution while eliminating excuses, no matter how easy it might be to have legitimate reasons to quite.

You start by swimming 2.4 miles, then you bike 112 miles and finish by running a full marathon, 26.2 miles. Not sure about you but I am tired just reading that. So he did this 50 times which means he swam a total of 120 miles, biked a total of 5,600 miles and ran 1,310 miles, not to mention the fact that he was traveling to every state. Now you can clearly see that if there was anyone who might have a legitimate reason to find excuses not to finish, it would be The Iron Cowboy. However, he was 100% focused on execution of his plan.

In speaking with James about his experience completing this monumental goal he would mention that quitting was never an option. He had set a goal and was going to accomplish it no matter what. His focus was on the overall impact that what he was doing would have on others, not necessarily himself.

Were their legitimate reasons or excuses that he could have used to stop, you decide: 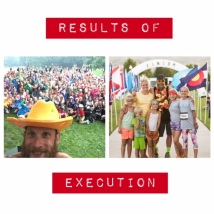 You can clearly see that most people would have allowed any one of these cause them to stop but James did not. He was focused on execution. He knew that what he was doing was helping to inspire others in so many different ways. I love hearing him talk about how there was almost a reciprocal motivation happening with each race. He was inspiring others to come out and not only support him but join him and as people came out, he was motivated to keep going.

I have learned so much from watching and talking with 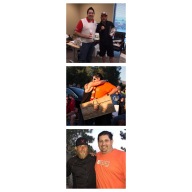 James. I have seen first hand how his ability to maintain focus on execution instead of finding excuses makes all the difference in the world. Amazing things can happen when we commit to our goals which is just one reason James is not just a great leader but what I would call a Hero Leader.

His continued focus on execution is evident as he continues to inspire others every day. He will be the first to tell you that there is no such thing as a good excuse, it is still an excuse. He will then say something to the effect of, set a goal and then do whatever it takes to achieve that goal, otherwise, execute.

If you would like to learn more about James “The Iron Cowboy” Lawrence, check out the links below.

I am honored to call him a friend and a great example of a Hero Leader.

Thanks James for being a 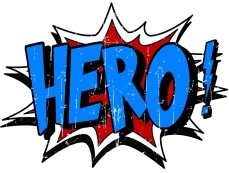 Happy Nationals Son Day to our 3 amazing sons. They have blessed our lives in so many ways. Truly blessed to be their dad. #nationalsonsday #blessed #love #amazing
Hey @collegegameday, here is your Top 25. What do you think? #collegegameday #itspallettime #collegefootball #top25 @itspallettime
First Real Salt Lake game and it was pretty cool. We are looking forward to going again. #rsl #soccer #goodtimes @realsaltlake
Who will win this big college football game? @alabamafbl or @texasfootball and yes, I made these pallets, let me know for you are interested in one. @collegegameday #collegefootball #collegegameday #alabamafootball #texasfootball #itspallettime
There are times when social media allows you to connect with pretty awesome people in real life. Dan and his awesome wife Kellie have been such great examples of living and loving life. #rockstar #awesome